The Interior of Panevėžys Cathedral

Looking at Panevėžys Cathedral fromthe outside, it appears smaller than it actually is, an impression predetermined by the architectural solution: the hightower of the shrine, flat roof and low plinth. Its real immensity is revealed upon entering the Cathedral, and this is a pleasant surprise for visitors.

The interior of the Cathedral is divided into three naves. There is also a chapel of the Blessed Sacrament in honour of which Pope Pius XI donated a monstrance. Over the sacristy there are two storeys. The stairs and bearing ceiling structures are made of concrete. The doors of the Cathedral are made of oak and artistically carved; windows are double. The floors are laid from coloured cement tiles but after repairs they were covered with parquet, which is in service to the present day. Under-floorheating was laid in the Cathedral. 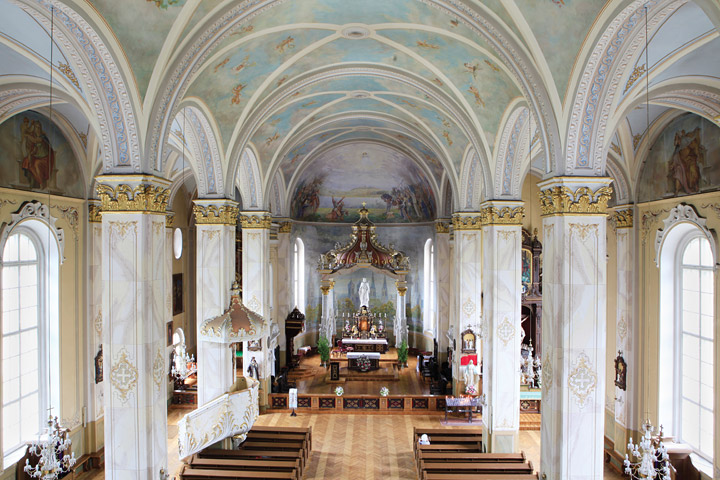 The High Altar was donated to the Cathedral by Bishop Kazimieras Paltarokas.The Altar Table (mensa) is of brick and stone masonry, topped with a white marble slab flanked by carved oak boards. It is surrounded by three wooden staircases, accessible from all four sides.

The tabernacle is crafted of oak, richly gilded, with statues of two angels kneeling on each side. This piece of art came from the studio of J. Rifesser. Placed over the tabernacle, there is a statue of Christ the King – a work of art by the first professional Lithuanian sculptor Juozas Zikaras (1881–1944). The ferro-concrete baldachin surrounding the Altar rests on four columns, surrounded by statues of angels (author V. Jakševičius). The top of the baldachin is crowned by the orb and cross.

The ceiling of the apse behind the Altar features the multi-figure composition fresco secco “Appearance of St. Casimir before the Lithuanian Army beside Polock” (1931–1933) (the technique where paint is applied on dry plaster and eggs are used as a binding agent). The fresco represents Saint Casimir appearing before the Lithuanian Army fighting against the larger Russian Army, and determining the victory of the Lithuanians. The event portrayed in the fresco is loosely based on history, but is intended to accent St. Casimir as the special patron. It was a composition by His Excellency Bishop Kazimieras Paltarokas, ably realised by Jonas Mackevičius, a painter of the interwar period (1872–1954). The dimensions of the fresco are 22 m x 14 m. The restoration of the fresco was carried out in 2004.

On the left of the presbytery, under the baldachin, there is a Bishop’s Throne, artistically carved in oak and draped with expensive fabric. It was a donation to the Cathedral by the Chapter of Canons.

The Altar to the Blessed Virgin Mary, made of oak in 1931 in the studio of J. Rifesser, is located in the Chapel of the Blessed Sacrament (in the left nave). The Altar houses a copy of Raphael’s Sistine Madonna, painted by Jonas Mackevičius. Above it, there is a smaller painting of Saint Casimir. There are statues of Archbishop St. Albert and St. Monika flanking the Altar. The Chapel also contains a statue of the ordinand Saint Aloysius, the patron of youth, with the following inscription: St. Aloysius, the patron of youth, we recommend to thee the Catholic Youth; guide them for the Love of God and Homeland. This statue was erected on 10 November 1932 to commemorate the 33rd anniversary of pastorate by Bishop K. Paltarokas and many priests.

A wooden sculpture of St. Casimir (brought from the belfry of Utena Churcht hrough the efforts of Bishop K. Paltarokas), dating from as far back as the beginning of the 17th century and moved from the crypt, stands between the High Altar and the Altar of the Blessed Virgin Mary. Saint Casimir, as the patron of the Diocese of Panevėžys and youth is honoured in the Cathedral of Panevėžys with several works of art.

The Altar of Saint Francis of Assisi contains the painting of the Crucifix and the sculpture of St. Francis of Assisi (in the right nave). The Altar was erected after the painting by B. E. Murillo where Saint Francis embraces Christ on the Cross. Above, there is an image of St. Stanislaus (Artist S. Rėmeris). The whole Altar was made of oak in the studio of J. Rifesser. There is a statue of Mary Immaculate Conception, highly worshipped by believers, erected between the High Altar and the Altar of St. Francis of Assisi.

An oak-framed set of wooden Stations of the Cross (Lat. Via Crucis) was created in the studio of J. Rifesser. The concrete pulpit is decorated with gildei plaster ornaments. The six baroque-style confessionals and stools are made of oak. Worshippers entering the Cathedral used to be welcomed by two concrete stoups with holy water (at present they have been moved to the crypt).

The pipe organ from the factory of Bruno Goebel in Königsberg (present-day Kaliningrad) was installed in the Cathedral in 1931. The organ has three manuals, 25-note pedalboards with eight foot couplersand two free combinations; there is an extension prepared for twelve new notes,and the air is blown by an electric motor.There is a balcony for the choir flanked bytwo artistic wooden sculptures of angels painted in white and gilded. At the exit, there are marble plaques with the names of the church benefactors (builders and donators) attached to the walls.

The Cathedral houses the bust ofK. Paltarokas, the first Bishop of Panevėžys (outside, over the entrance to the crypt)and a bronze relief on the left side of the presbytery. There is a spacious crypt beneath the Cathedral, where the remains of K. Paltarokas were interred in 1958.

The Cathedral also has custody of about twenty unique wooden Baroque style sculptures (most probably intended for the Altar of the Church of Saints Peter and Paul in Vilnius) dating back to the 17th century. They were moved to the Cathedral from Debeikiai church (Anykščiai District Municipality).

There are no chandeliers in the central space of the Cathedral leading towards the Altar. They are hung on either side of the Cathedral thereby expressing the idea of Bishop K. Paltarokas – a visitor entering the Cathedral must set eyes on the open light of the Altar and the regal sculpture of Christ the King emerging from it. 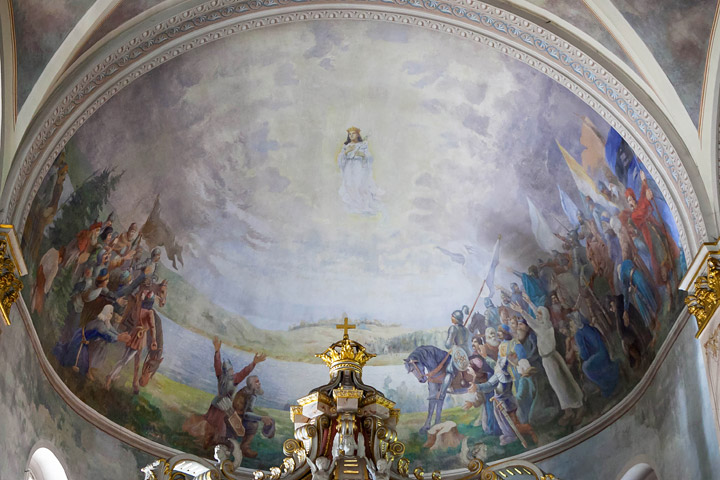 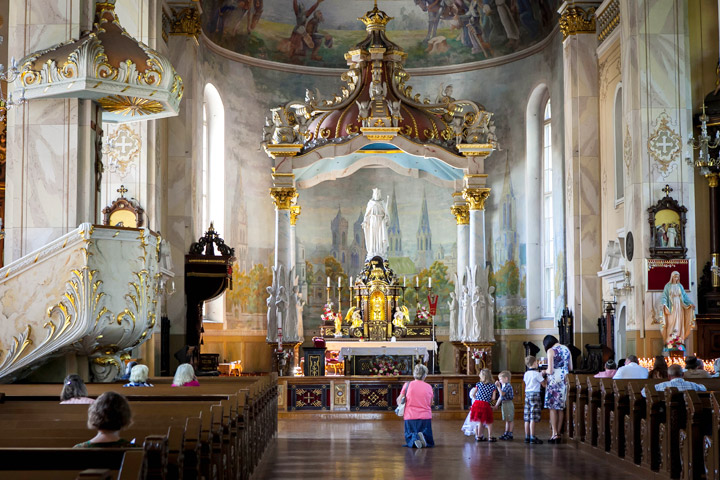 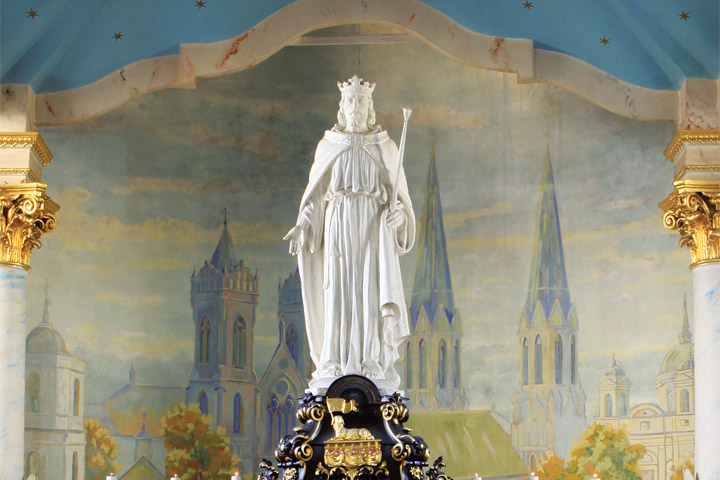 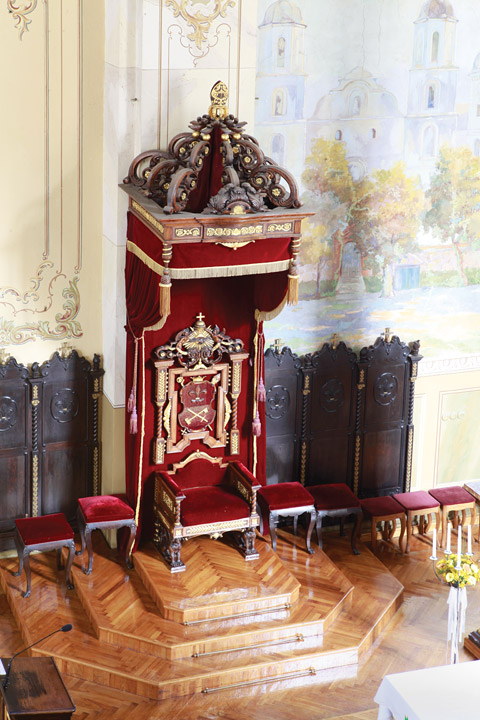 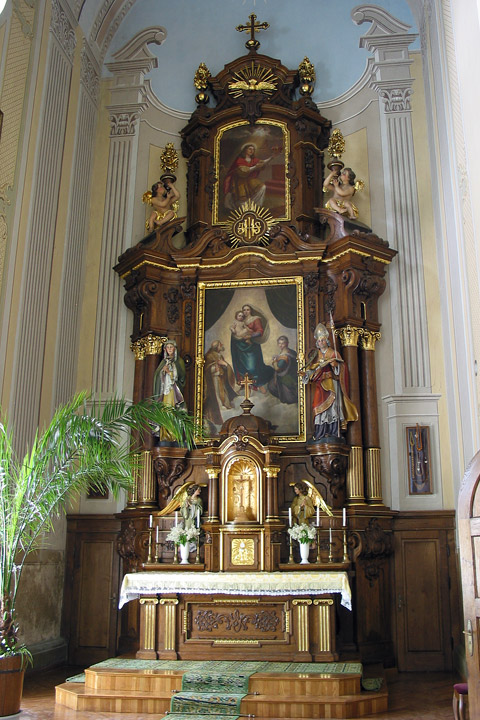 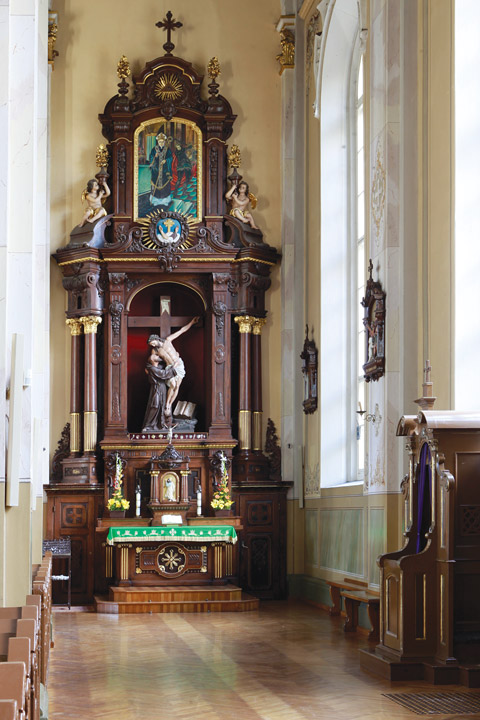 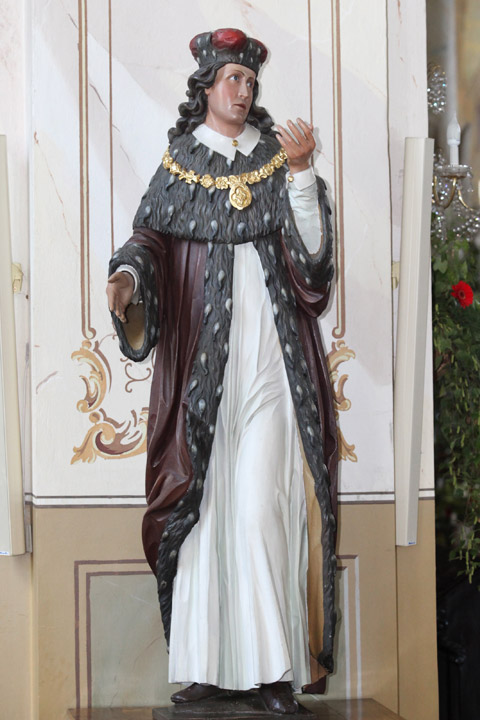 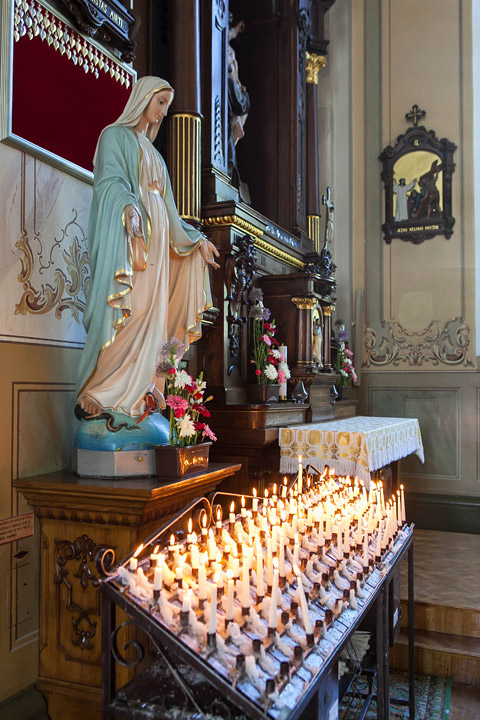 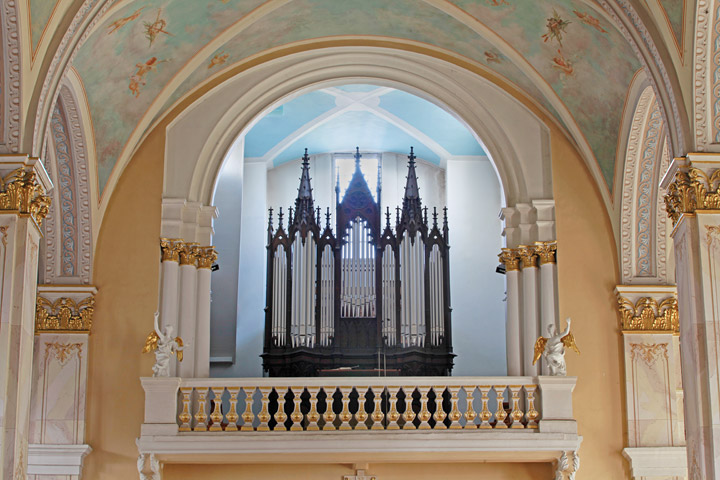