The Exterior of Panevėžys Cathedral 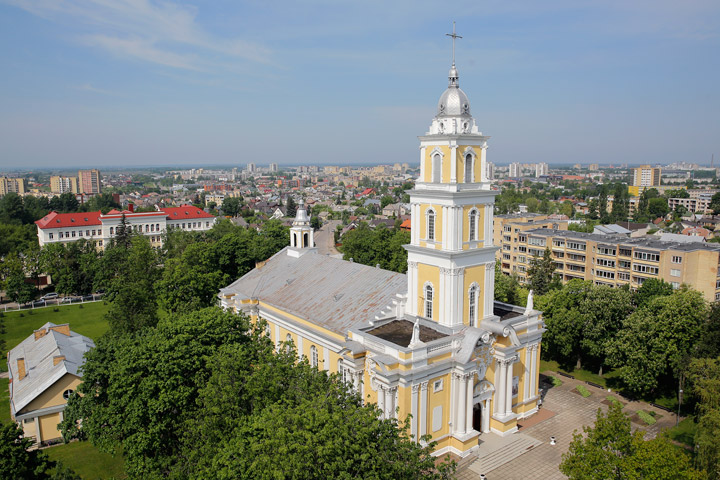 The shrine is decorated with graceful Corinthian columns and pillars. The portalsare decorated with beautiful ornaments instucco. The architecture of the main body of the building is repeated in a four-stagetower with a dome topped by a gracefullantern. The portal of the main façade is flanked on both sides by a palatial pair of columns connected with a column base. Theend of the roof is covered with an exquisite balustrade. Niches were designed in the Cathedral to hold statues of church pastors,the founders of the Diocese of Panevėžys, namely: Pope Pius XI and the Blessed JurgisMatulaitis (author V. Jakševičius). They aremade of cement and reach 3 m in height.

The Cathedral belfry is installed inthe tower built by the engineer PranasMorkūnas. In 1931, four bells cast bythe Schilling Bell Foundry in Apolda, Germany, were consecrated. The bells ringin the accord D-flat, F, A-flat, B, the melody Salve Regina. One bell weighing 1628 kg, dedicated to Christ the King, bears an inscription: Speak to the minds of nations, stir up their will, do not let them commit wicked mistakes… Oh Lord Jesus, King of Kings, destroy also the source of humanity’s sins. The image of Christ the King is cast beside the inscription.

The second bell, dedicated to the Blessed Virgin Mary, weighs 771 kg. This bell also bears the image of Mary and an inscription: We thirst for God in soldiery, laws, court, script, schools, public society, and all throughout the country of Lithuania. Holy Maiden, shelter us.

The third bell, dedicated to Saint Casimir,weighs 434 kg. There is a bas-relief inscribedon the bell together with the words from thechant: The purest soul, the brightest heart, the selected Flower of the Nation. Saint Casimir, plead with Almighty God, save our country. Saint Stanislaus, the Martyr, is honouredwith the fourth bell: Sancte Stanislae, ora pro nobis (St. Stanislaus, pray for us). This bell weighs 301 kg.

In front of the grand gates leading to the churchyard of the Cathedral, on the right, there is a wooden sculpture nobly surveying the passers-by, carved by the sculptor Vytautas Ulevičius and dedicated to the occasion of the visit of Pope John Paul II to Lithuania (1993). On the leftside of the churchyard, there is a granite monument dedicated to the deportees “Pieta” by the sculptor Algimantas Vytėnas (arch. A. Šironas), which was unveiled on 14 June 1995. The northern part of the churchyard is decorated with a wayside shrine, signifying the 50th anniversary of the Diocese of Panevėžys (1926–1976), erected by the priest Juozas Varnas and brought from Vabalninkas Parish (Biržai District Municipality). It was later restored. Under the care of the Bishop of Panevėžys Juozas Preikšas, a wooden monument was erected 20 years later, commemorating the 70th anniversary of the Diocese (1926–1996).

Not far from the Priest’s House, near the sacristy, the churchyard is adorned with an ancient Cross of Missions (by an unknown artist). It has also been restored.

On 12 September 1989, the remains of a prominent priest of the Lithuanian nation, God’s servant Alfonsas Lipniūnas, were brought from Puck (Poland) and reburied in the Cathedral graveyard. The gravestone was made by the sculptor Alfridas Pajuodis and placed on the grave in 1993. The case of the beatification of the priest Alfonsas Lipniūnas was started in 2006. A commemorative plaqueto honour the priest A. Lipniūnas is attached to the northern wall of the Priest House (Artist K. Krasauskas). 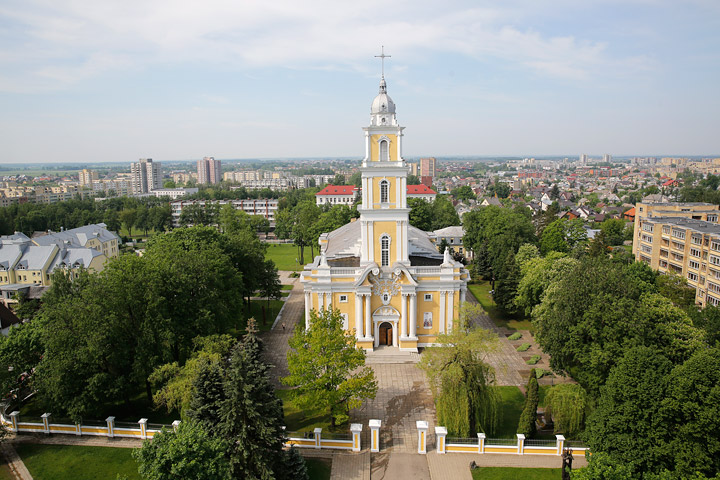 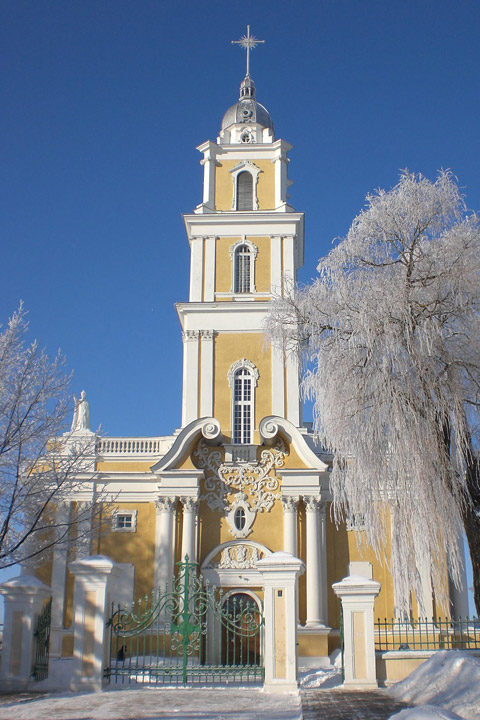 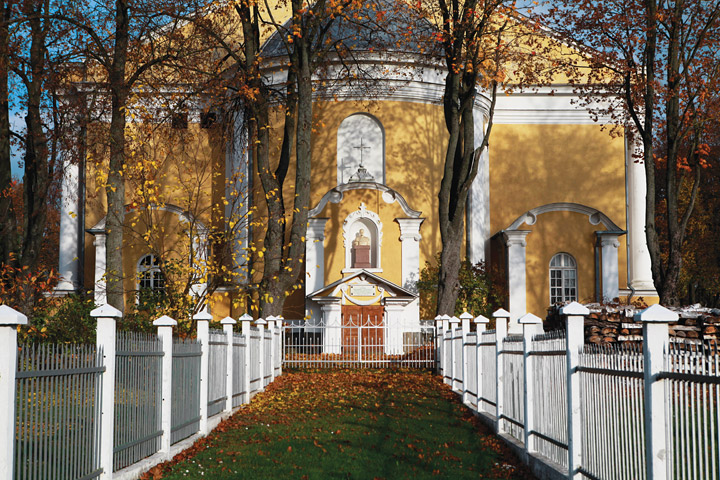 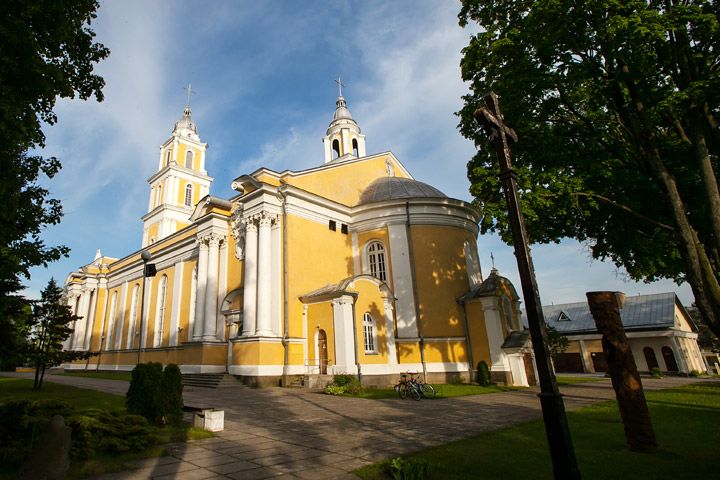 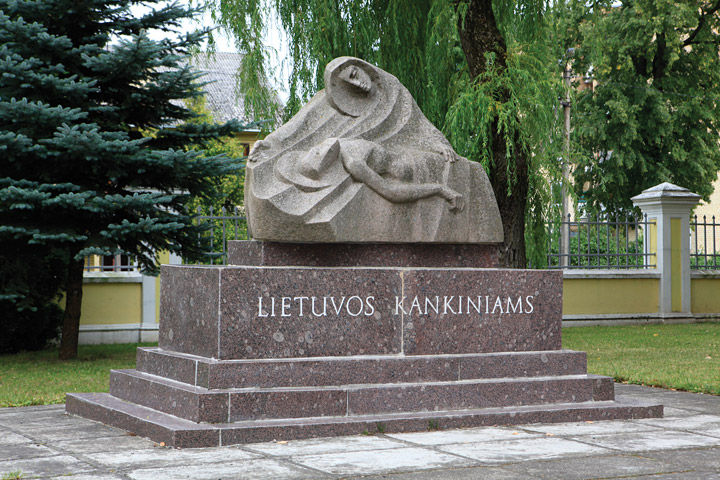 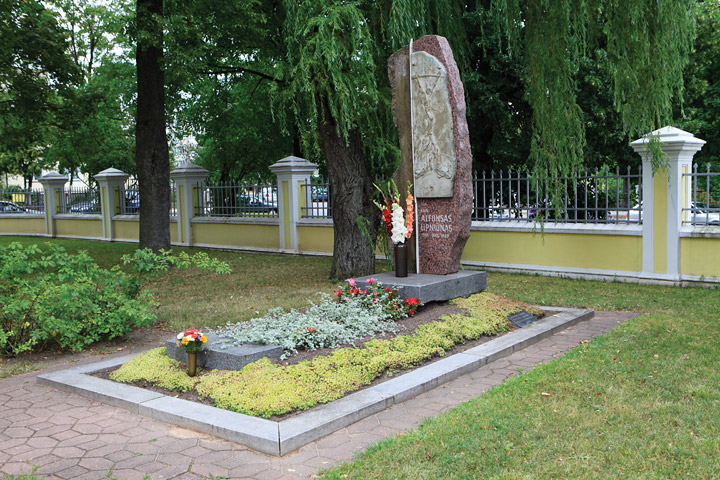